These works were inspired by some photos I have took in London at the Tate Britain museum. The recent exhibition  called ‘ The Asset Strippers’ by Mike Nelson really inspired me because of how the space of the museum was rethinked and changed and how his artworks were combined with the architecture of the museum. I really liked how the interior of the museum ( Duveen Galleries) with collums was looking in correlation with the objects that the artist chose , for example post-war ones which ‘framed his childhood’ and also enormous knitting machines, woodwork stripped, grafted steel awnings and doors from an NHS hospital. In these paintings I included the collums, some arches and a little bit of the objects that surrounded the space. I wanted to caption the light and the darker parts and that is why I chose the really bright orange and the dark blue. I wanted them to look like a never-ending story. 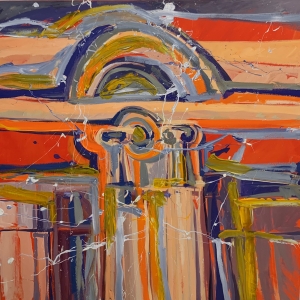 View in my gallery